Every year, Handel’s “Messiah” is a communal ritual — a glittering parade of recitatives, arias and choruses that binds listeners and performers together in a story of promise, betrayal and redemption.

But not this year. In 2020 the oratorio, if you listen to it at all, will be by necessity a private matter. And many artists for whom it is a beloved (and remunerative) staple remain almost entirely out of work.

In this context, the emotional arc of “Messiah” — from comfort to grief to eventual relief — can feel more powerful than ever. Here, listen along as seven singers and two conductors offer a behind-the-music guide through the work.

When you step up to the stage at the beginning of “Messiah,” every eye in the room turns to you. For the next three minutes you have complete command over everyone’s emotions.

“Comfort ye” is my moment to take everyone’s anxiety, and pause for a second to reflect on why we’re here. You come after the overture, which is this almost chaotic moment, like everybody bustling about trying to get presents, or running to Carnegie Hall after a busy day of work. And then the beginning of “Comfort ye” is so solemn.

What I’m after is a sense of calm. It’s all about long lines. Baroque ornamentation is fun, but here, it’s about taking time and not doing anything too flashy.

It’s a bubbling up of excitement, this secret you can’t wait to tell.

It starts with exuberant champagne bubbles in the strings, and by the time you’re ready to sing you almost can’t contain your excitement. It’s like you’re addressing a friend who’s been grieving and maybe has been home alone for a while, and you come over and say, OK, get your coat on, we’re going to have a great time: “Get thee up into the high mountains!”

There’s healing, as well. Those exuberant string notes with that wonderful contrast between the high and the low feel like a weight is being lifted. You have this energy you didn’t know you possessed. The aria goes straight into a chorus and everybody joins in. 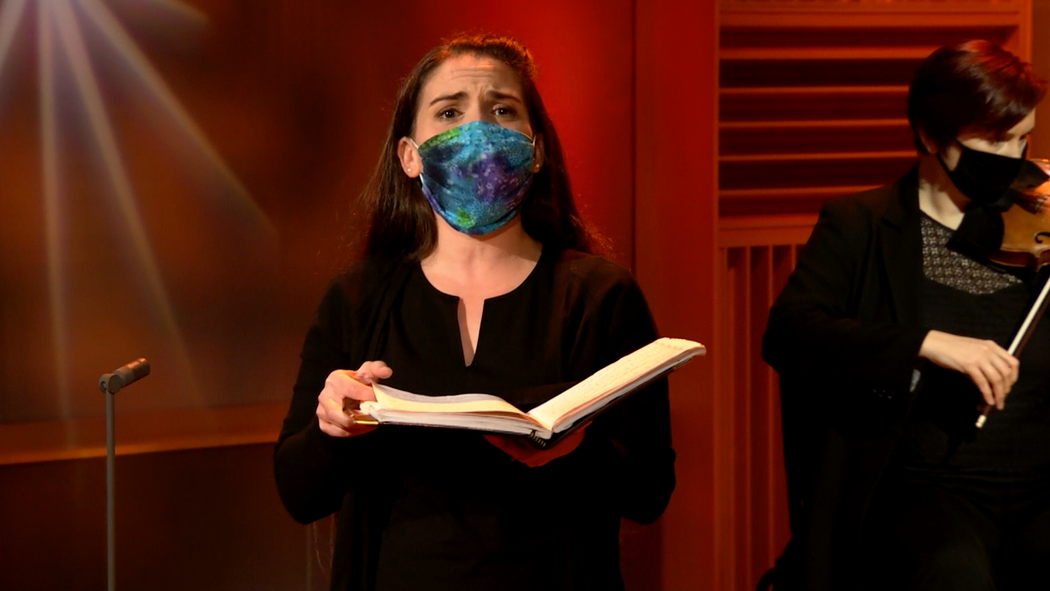 The music sounds like skipping through a meadow. I don’t know how you can say the words “rejoice greatly” without smiling. But the challenge is how to make the joy last so it doesn’t feel false or overdone. In the da capo section — on the words “Shout! Shout!” — instead of letting them get louder, I now make it more internal. Something to rev yourself up.

Straight from the beginning, the phrases expand with each iteration. And the melismatic passages are exciting, almost like a game. Once you’re past the technical part of it, it’s very easy to find the playfulness in this aria. The da capo is ecstatic, with ornaments on top of ornaments.

Reginald Mobley, countertenor: ‘He was despised’

With its limited range and simple placement of notes, this is a piece that needs more than a park and bark. This is an aria that needs more than a big-haired Texan soprano spinning some tone for an expanse of quite a bit of an hour.You as the artist are the conduit: You have to be a prism for this incredibly heavy emotion that sets the stage for the Passion portion of “Messiah.”

If you speed up the “A” section and slow down the “B” section — which usually sounds like a cavalry charge — then you can hear the flagellation, you hear Christ being tortured. My job is to transmit the personal horror and shame of being responsible.

In 2014 I was singing the aria in Kansas City. This was the year of the Ferguson riots following the killing of Michael Brown. As I was singing, I thought of him and all the others who have been murdered by an unjust system. I thought, I get to be a survivor and tell the story of my brothers, my sisters, who were scorned and shamed and spited and spat upon. And I have to carry that shame: of what Americans should feel allowing the system to go on as long as it has.

What Handel is good at doing is creating amazing emotional contrast. At the very end of this piece is the crux of humanity: The iniquity of everyone is going to be laid on this one person. Up until then you have this comedy of sheep turning around and running away — I always think of an English sheepdog trying to round everyone up — and all of a sudden it comes down to this very profound moment.

In the runs, everyone in the choir gets to weave and turn away. And then people sing “Everyone to his own way” over and over, and it’s all on one note, like everyone running into a fence and not knowing what to do.

Jonathan Woody, bass-baritone: ‘Why do the nations so furiously rage together’

I performed “Messiah” in Kansas City in December 2016. The recent election was on everyone’s mind. In between the dress rehearsal and the concert I read about a politician who, speaking about the Obamas, said something about Michelle returning to the Serengeti to live as a man. I read it on my phone and it broke my heart. In performance that day, what I was really doing was asking the people in the audience: Why do we hate each other, mistrust each other, dehumanize each other?

I look around the world that we live in where we continue to treat people terribly. When Handel sets these rage arias, I get the sense that he understood that also. The world he lived in was not any less tumultuous than the one we live in today. I hear it in the music, in the intensity of the string figures, those 16th notes. I hear that angst.

So much of the magic is the sheer jubilation that Handel conjures. The “Hallelujah” chorus sets out a firm, memorable exposition and then takes us to what is a short but extremely touching section about transformation. Then, through a sequence of sequentially rising pedal points on the words “King of kings,” he creates a sense of uplift, followed by a compaction of “Hallelujahs” as they barrel toward that cliff’s edge before the final absolute affirmation. It’s an incredible structure.

When everyone in the hall rises from their seats it’s an amazing moment. You feel the energy shift in the house. And I see the glow on the faces of the choir as though they are a mirror reflecting what the audience is doing. Because of that choreographic moment, you get the sense that we are really on the same level. It’s magical and hair-raising.

Jolle Greenleaf, soprano: ‘I know that my Redeemer liveth’

I see this as an opportunity to share a message of hope and love during a season when it’s getting darker, when people are looking for meaningful connections and ways to manage their emotions through the holidays. I try to look out at the audience and make as many personal connections with the people there so that they can feel that there truly is hope, that I’m a vessel for that hope.

The tune feels very expansive. It just glides in a way that you can add ornaments to it. Those ornaments help create the gold filigree that you would see in a tapestry. Of course there is acknowledgment of darkness: “Though worms destroy this body.” I was 35 when I was diagnosed with cancer. It made everything related to death feel more fresh and raw and scary. But there’s power in reclaiming that and singing about hope despite that fear.

This aria is about awe in every possible form. There’s the reverent awe of someone shocked into paying attention, hearing this mystery that says that no matter who you are, you are going to be raised after death, and no matter what trials you’ve gone through, you will have everlasting life.

And then it’s the amazing sense of awe you get from hearing a rare trumpet solo. I just love that sense of grandeur: Even though it is a triumphant piece there is such mystery and quietude.

The “B” section is a moment for reflection. As if shocked by this awesome presence, you need to take a moment: What have I just experienced? It’s a joy to sing those lines in one breath, to heighten the drama and really cinch these incredibly long phrases together. And to come back to the “A” section, now highly ornamented with all the regalia of your own vocal prowess and the entire emotional experience of having gone through this story. Not only to see, but to share. It’s the greatest moment onstage to be able to say to the audience: This is for you and this is with you.